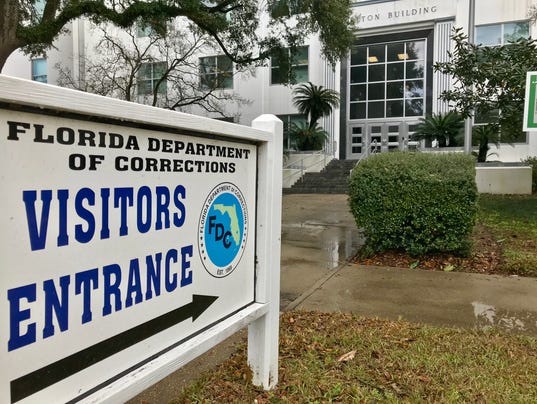 The Florida Department of Corrections put its downtown Tallahassee employees on high alert over possible protests next week outside its offices.  The office of FDC Secretary Julie Jones sent an email to employees on Thursday warning about the potential for protests on Tuesday outside the Carlton and Holland buildings on South Calhoun Street.

“FDC’s Office of Intelligence has been tracking the event on social media,” the email says. “The Department is working closely with state law enforcement to ensure all security concerns are addressed and staff can continue to safely perform their work duties.”

The email, which was obtained by the Tallahassee Democrat, says protests are permitted on the grounds of the building. But the department said it was taking a number of steps “in an abundance of caution,” including locking all doors to the Carlton building from 10:30 a.m. to 4 p.m. Tuesday. All employees will be directed to the Gadsden Street entrance, the only place where badge readers will work that day.

“Staff will be permitted to leave at any time, but are strongly encouraged to stay indoors during the work day Tuesday,” the email says. “Staff are encouraged to limit smoke, exercise and general breaks outside the building. If possible, plan to spend your lunch hour within the building. Please note that food trucks will not be available and outside deliveries are discouraged.”  FDC brass advised staff in the email to limit outside visitors, meetings or unnecessary guests.

“Expect to see additional security and staff and uniform officers at building entrances and exits,” the email says. “If you have questions or concerns speak with our Bureau Chief who has been briefed on the potential protest. In everything we do — staff safety is our chief priority.”

The possible demonstration coincides with an announced protest by inmates called Operation Push. Inmates are calling for all Florida prisoners to stop working starting Monday over issues including payment for their labor and canteen prices. The protest could last as long as a month, the Miami Herald reported.

Michele Glady, spokeswoman for FDC, said the agency sent the email to be as transparent and upfront with its employees as possible.  On the issues raised by inmates, she noted that FDC uses an outside vendor for canteens, where prisoners can purchase groceries and items from stamps to playing cards. She said the canteens give inmates “access to affordable items for purchase.”

Glady said inmates work in jobs ranging from laundry, cooking, prison maintenance and outside work squads. They are not paid for their duties.  Asked about steps the agency was taking because of the work stoppage, she said, “The department will continue to ensure the safe operation of our correctional facilities.”

EDITOR COMMENT:  Taking issue with Michele Glady on affordable canteen items?  Everything in the Visitation canteen is grossly overpriced, some items 3 to 4 times the cost if purchased from a fast food restaurant.  In addition,  the food is processed and disgustingly high in cholesterol, sodium and saturated fat.  Time to introduce healthy choices for offenders and their guests!